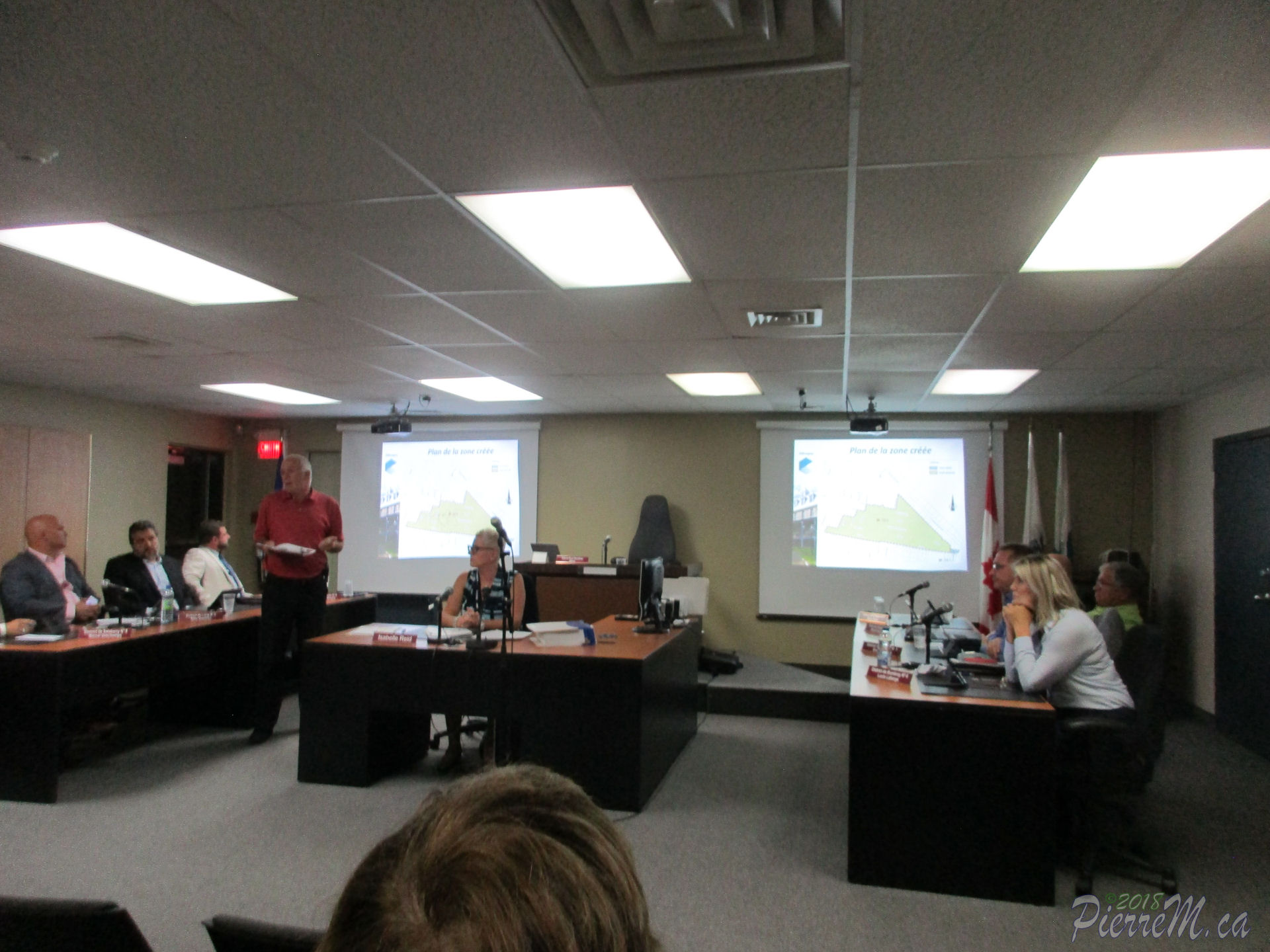 Several hot button topics were on the agenda this month at the local council meeting.

I’m going to start with the one that everyone I know has been talking about, and that’s the proposed land development in the Lang Farm orchard between St-Francis and Lang streets (Zones: H-627 and H-606). The owner of the land, and project developer, Mr. Leblanc had been permitted to build up to 12 single story single family houses, since the land was already zoned for such. However, new plans were drawn up, which would double the density up to 2 stories, and double the amount of houses up to 24. The first phase was supposed to be adopted tonight however it was postponed until the next meeting in October so that more residents in the area could be informed and have their opinions heard.

A new residential development project near the corner of Pascal and Industrial Blvd was presented to us. The zoning in this area would need to be changed due to the amount of houses requested, and the size and proportions of the land available. One such modification would be to have two parking spots side-by-side in the front of the house, since access to the rear would be too narrow for vehicles to pass. The minimum 40% green space and required tree planting would still be there, however the driveway would be located at the front steps of the house.

The proposed project is currently in a much larger zone (H-304) that includes parts of Albert-Einstein all the way up to Nobel. As not to change the zoning for the entire district, the city has proposed creating a new zone for this one project (H-341). This way homeowners in the current sector would not be able to automatically change their properties to build several houses on their same lot, or build closer to the edge of the property lines than previously permitted. Residents will have the opportunity to sign a registry if they do not agree with this project, and a referendum will be held if there is sufficient opposition. 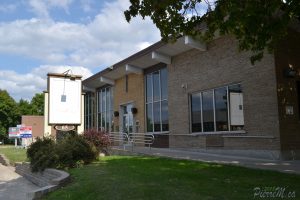 The mayor has proposed to the council and residents, the idea to purchase and renovate the old Caisse Populaire building on Principale street. The current building was left abandoned when the previous owners moved to their new Siege Social building near the hospital. The building is up for sale for $550,000 and the mayor proposed that this would be a great place for a courthouse, council chambers, permits office, 311 information call centre and city projects office. The 3 steps required to complete this transaction would involve the approval (by majority) of the councillors, a building inspection within 30 days, and municipal affairs approval of the loan to purchase the building. A vote was held during the meeting and the proposal was turned down 7 councillors to 1. Somehow I don’t believe this is the last we’ve heard about this project, and perhaps it will be proposed again at a later date. Personally though, it doesn’t seem like that bad of an idea, in principle. The mayor explained that the current chambers located on d’Anjou Blvd cost the city over $100,000 per year in rent, within just a few years the new building would pay for itself. (Plus it would mean they won’t be tearing down yet another building in our town). We don’t know all of the details, so there could very well be other reasons why the proposal was turned down.

And speaking of tearing down buildings.

The Albini project has been given the green light, so the historic 150 year old house and associated land is making way for 16 new houses. Another historic building is going away as well, 10 Omer-Loiselle. This time so they can add 13 new parking spaces for the community centre across the street. Contract was awarded to “Univert Paysagement Inc.” for the amount of $128,513.31 to clear the land and pave it over.

While I’m on the topic of parking. The CHSLD Trefle d’or (long care facility) has requested the use of a nearby city owned parking lot at Parc Chevrefils. One concerned citizen mentioned that normally a health care facility has to charge for parking, and would this also mean that this parking lot would also become a pay lot as well, and the mayor confirmed this as a possibility.

EXO, the organization responsible for public transportation in the Montreal Area, is in discussions with the city to build their new offices at our Autoparc, as well as to modify the bus entrance and exit and add 11 bus bays. Currently there are 650 parking spots, but the proposed construction would cut this number down. The mayor has proposed to EXO that they build a 3 story parking structure which would accommodate many more cars. Negotiations are still underway, however, at the present time, the answer is no. The city hopes to pressure the government to force EXO to build this parking structure, whether it be above ground or underground. Councillor Leborgne suggested that if they build it, they can add green vines and plants on the side of the structure to make it more appealing.

The city will no longer need to rent out gym space, and will now use the Sportsplex for the various activities. This will save approximately $50/hr of time used, which will go towards covering part of the fees associated with the new building.

Rules for cannabis consumption and usage, for the public and for the city employees, will be finalized on October 15th. 3 days before the new Canadian law comes into affect, legalizing its use. The city will make adjustments to it’s alcohol, drug and medication policies for its city employees.

The city is still looking to find a new place for the municipal snow dump. The amount of available undeveloped land is running out and the city would like to make the snow dump, along Albert Einstein, available for developers. The deal involving 3 promoters, “Placements Raymar Inc.” , “Azimut Promoteur Immobilier Inc.” and “Gestion Leblanc Borduas Inc.” would require them first to build the streets and connect to the city services, at which point they would return the infrastructure back to the city.

The foundation “Gisele Faubert Inc.” is looking to build a new home for a palliative care institution in our town. In the meantime the city has provided them with office space at the public library in the currently unused “Café”, for a period of two years at $1 per year. A side note, councillor Michel Eneault is the president of the Gisele Faubert foundation, and based on information obtained at the meeting, he has not held any position in this foundation beforehand.

The property cleaning division has been making several inroads, and has sent notice to one resident on Seigniory who was brought up last month regarding chicken carcasses, feminine products and diapers scattered in the front lawn. Cleaning has also taken place  at 154 Oliver West, where city workers noticed very tall weeds and a filthy swimming pool. And a registry has been created to record the significant deterioration of the property on 382 Colville.

The city will be submitting it’s request for the finals of the “Jeux du Quebec” in 2022.

During the question period several questions to the city were brought up including the ongoing issue with excessive smoke produced by some backyard campfires. Parking issues along the river on Salaberry near the boat launch. Three large piles of dirt have been sitting on Gilmour the last few days. The resident says it was from a nearby construction project, and the dirt is polluted and why the city doesn’t do something about it. Another citizen was upset that he was forced to pay $312 at the new speed bumps on Salaberry near the Old Orchard. When asked what the two had to do with each other, he explained that he drove around the speed bump, and the police stopped him for crossing a solid yellow line.

The city promised to look into a more permanent solution, and they agree that the speed bump is quite high, but it will be removed shortly for the winter and a new solution will be found next year. This corner has always been quite dangerous, but has gotten worse since the new traffic light was installed that permitted traffic to continue at speed instead of a stop sign that was there previously. Also in this location a few citizens were upset about a recent change in parking policies at one lot. “Someone sitting on a lawn chair collecting $10s from everyone who wants to park there”. The city says there is nothing wrong with this, and it’s not against any rules, since it’s their own private property to do with what they wish.

However, it doesn’t help the lack of parking in the area that already exists. The city said they will assist in trying to find a solution, since it was a city modification that allowed 3 restaurants to operate with limited parking availability in the first place. New options could be extra parking at the church across the bridge, or the community centre when it’s not being used. Discussions will continue next month about this.

The Beau Chateau committee will be meeting on Thursday at 1:30pm, and a concerned citizen is invited to request an explanation for the $160 fee that the Sportsplex will be charging for every player from out of town that participates on a local team. Also, fees will be explained where every house, condo and apartment in Chateauguay will be charged a fee of $50 for the new Sportsplex.

Finally, a topic that has been in the local news these past few years. Councillor Mike Gendron has finally had his name cleared of all wrongdoing. This was a municipal matter, and the city will be covering the costs of $70,000 for his legal fees. Mike Gendron was represented by the now mayor Mr. Routhier, who transferred his file to an associate when he was elected, to avoid any conflict of interest.

That’s about it for this month. As usual I hope you found this recap interesting and informative. Let me know if you would like to hear anything else about the meeting that I haven’t mentioned, and I’ll do my best to get an answer for you.